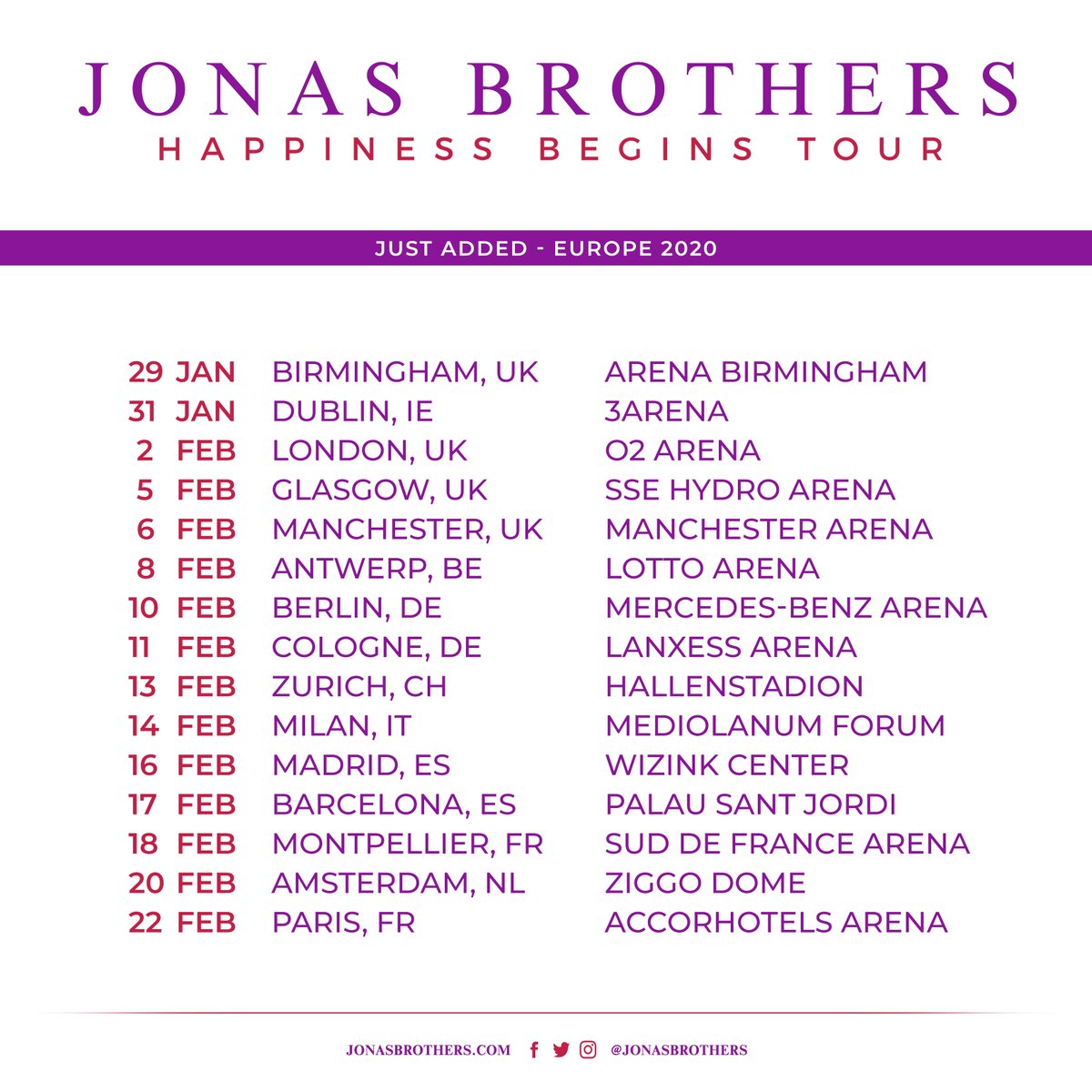 Due to OVERWHELMING demand, the boys have added even MORE dates to their ‘Happiness Begins’ tour later this year, including some dates in Mexico. Pre sale for American Airlines Mastercard card holders starts on May 17th and public on sale will start on May 18th. You can also register for the Ticketmaster Verified Fan presale which starts on May 16th at 10am local time.

This has honestly been mind blowing for us… Because of the amazing reaction to today’s on sales we’re SO excited to announce that we’re adding even more dates to the #HappinessBeginsTour!! https://t.co/dRYRYCiRYo pic.twitter.com/vqRA6vGy3l

LaneOne has VIP tickets for sale for the Jonas Brothers’ Happiness Begins tour! If you are unsure about LaneOne, you can check out their FAQ page here. The link to the tickets are available HERE, and go on sale at 10am! NO PRE-SALE CODE IS NEEDED!

Here is some info about the packages:

Exactly two months after the Jonas Brothers release their highly anticipated fifth album Happiness Begins on June 7, the sibling trio will be hitting the road to bring their new tunes — and some good ol’ nostalgia — to North America. The bros announced their 40-date Happiness Begins Tour today (May 1).

The trek will kick off in Miami on Aug. 7 and wrap on Oct. 20 at Los Angeles’ famed Hollywood Bowl. The brothers will play arenas in big markets including Atlanta, Boston, Toronto, Detroit, Nashville, Dallas and Chicago, with a performance at New York City’s iconic Madison Square Garden on Aug. 29 — their first MSG show since a three-day stint in 2008.

“We’re so excited to announce this tour and get in front of our fans again,” the Jonas Brothers said in a statement. “We can’t wait for everyone to see what we have planned!”

Bebe Rexha and rising singer-songwriter Jordan McGraw will open for the Jonas Brothers throughout the tour. Along with the tour announcement, the JoBros launched their official merchandise store and the pre-order for Happiness Begins.

DNCE performed at the Staples Center in Los Angeles, California on the 8th of July. I’ve added 15 HQ photos of the concert to our gallery. Don’t forget to check them out below:

Nick performed at the Barclays Center in Brooklyn, New York City on the 8th of July. I’ve added 13 HQ photos of the concert to our gallery. Don’t forget to check them out below:

Nick performed at the BB&T Center in Sunrise, Florida on the 1st of July. I’ve added 81 HQ photos of the concert to our gallery. Don’t forget to check them out below:

Nick and Demi Lovato kicked off the Honda Civic Tour: Future Now at the Phillips Arena in Atlanta, Georgia on the 29th of June. I’ve added 85 MQ photos of the concert to our gallery. Don’t forget to check them out below: